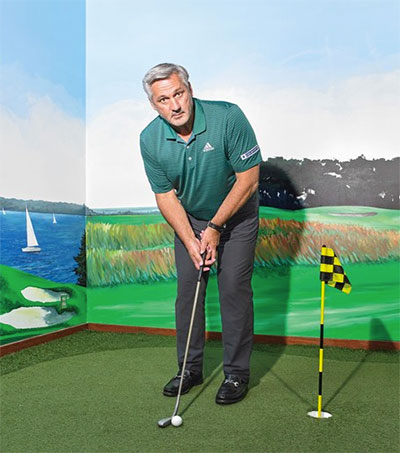 “I go through these little Twitter boycotts,” Nobilo, 57, explains. “Someone will troll that I’m the worst broadcaster on TV. I’ll go silent, brood and swear to never go on Twitter again. Then one night I’ll get bored in my hotel room. I’ll peek at Twitter and see a compelling thread. I’ll jump back in, the discussion goes great, and suddenly my faith in humanity is restored. Then here it comes, trolls again. ‘You need to shave –you look like a transient,’ someone will say. Or, ‘Your accent is annoying … Go back to where you came from.’ I’ll get mad and leave again. I know me. This cycle will probably never end.

“When Tiger played poorly at the 2014 PGA Championship, Chamblee and I got into a debate over the reason for his struggles that some would call epic. Arguments certainly make for good TV, but being contentious for the sake of being contentious wears thin.

“I’m asked about that episode more than any other show we’ve done, so what do I know? We both joined Golf Channel in 2004, the first year of the ‘Live From’ series, and one thing we would both agree on is that it’s a show we’re proud of. The blend of personalities works.

“When I played in Europe years ago, I was briefly into fast cars. I owned a Ferrari and went over 160km/h on a deserted, straight road. Then I got to know a top Formula One driver named Peter Gethin, and occasionally we played golf together. One day he took me out to the Goodwood racing track and put me in the passenger seat of an F40 to go for ‘a little spin.’ The acceleration put me back in my seat, and he took the first curve at 190km/h, steering with one hand, making small talk and looking at me as he drove. I didn’t hear a word of what he said because I honestly thought I might die at any moment. On the straightaway, we flew past a Testarossa, and my thoughts escalated from a simple accident to a deliberate murder-suicide. I didn’t know Peter that well. When I glanced at the speedometer, it read 290km/h. After he pulled into the pit, I got out and very nearly vomited. He walked around the car, put his arm on my shoulder and whispered in my ear, ‘Now you know how I feel when you take me to those bloody back tees.’”