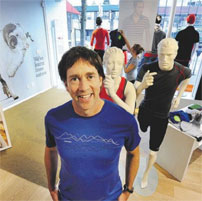 Icebreaker owner and CEO Jeremy Moon hated wool as a child. “I had to wear it as a kid and it was my nightmare — itchy, heavy and prickly. It sucked.” In 1994, a 24-year-old Moon stumbled on a way to redeem that nightmare. A farmer in New Zealand’s Southern Alps handed him a merino wool T-shirt. It was soft. It was light. It had massive anti-stink powers, refusing to be infused with the human body’s less exquisite perfumes. Moon quit his job in market research and launched a nightmare-busting merino apparel outfit he called Icebreaker. Today, Wellington-based Icebreaker buys 25 per cent of New Zealand’s merino wool, which represents 17 per cent of the country’s overall wool production. The company’s revenues have climbed from a bare $11, in its first year to the $13 million Moon expects this year. To reach its potential as an outdoor brand, Icebreaker will need to triple in size, Moon says. While the company is diversifying into new apparel areas such as cycling, Moon plans to stick to his knitting. “We are the global merino expert,” Moon says. “We’re not going to do sunglasses. We’re not going to do hiking boots.” This month, Icebreaker opened its first Touchlab store in Vancouver.