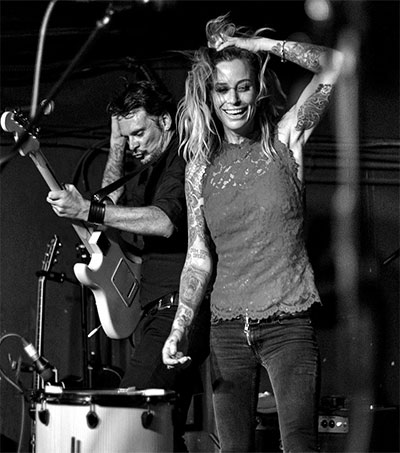 “There are singers, and there’s Gin Wigmore,” according to Billboard. “The New Zealand-born, Los Angeles-based artist’s raw, bluesy voice is so distinctive, some pundits are convinced it’s only a matter of time before the rest of the world will recognise it.

“Chances are, if you watch TV you’re already aware of her talents without necessarily making the connection. She’s synched her music to a slew of ad campaigns, from Johnnie Walker whisky to Alfa Romeo. She appeared in the background performing her song ‘Man Like That’ in a Heineken beer cross-promo for the 2012 James Bond Skyfall film.

“‘If you align yourself with the right [product], it can be really powerful. You can have a huge other platform, a way for people to hear your music,’ Wigmore tells Billboard.

“Wigmore also maintains a traditional release strategy. This week she dropped the video for the robust retro-blues song ‘Willing To Die’ (featuring Suffa & Logic), directed by her sister Lucy. It’s lifted from the [Wigmore’s] third album Blood To Bone, which opened at a career-high No. 13 in Australia. All of Wigmore’s albums have reached No. 1 in her homeland.

“Like many fellow Antipodean performers, Wigmore calls California home (she’s married to Jason Butler, lead singer of US punk band Letlive). LA is like a ‘mini country in its own city,’ she explains. ‘You have the desert on your doorstep and being so central going over to Europe, New York, the UK or back to Australia and NZ, it’s a good little halfway point. It makes sense from a practical perspective.’

“Wigmore, 29, completed a national US tour last year and she’s coming back for a North American trek starting 27 March at U Street Music Hall in Washington, D.C.”