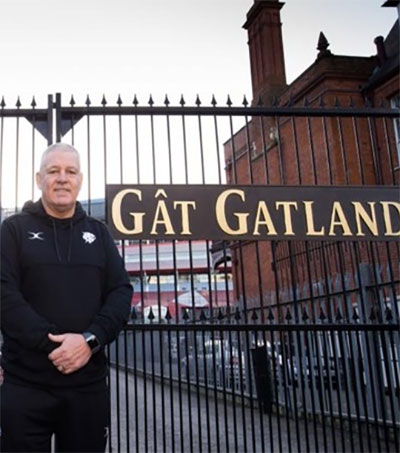 New Zealander Warren Gatland says he is “humbled” to have been honoured by the Welsh Rugby Union (WRU) after having a gate at Cardiff’s Principality Stadium named after him, ITV News reports.

The main vehicle entrance to the stadium – Gate 4 – will now be known as “Gatland’s Gate”.

The wrought iron double-fronted gateway, feeding a road which descends into the heart of Wales’ national stadium will now forever carry the name of the triple-Grand Slam winning former head coach.

Gatland’s 12-year reign over Wales saw him complete his first Six Nations clean sweep in his debut season in 2008, before repeating the trick in 2012 and finishing on the same high, earlier this year, to win the 2019 tournament.

He who took charge of two successful British & Irish Lions tours during his tenure with Wales, and was also at the helm for three Rugby World Cups, reaching the semi-final stages on two occasions in 2011 and 2019.

At the unveiling, WRU chief executive Martyn Phillips said: “This is a small tribute of our appreciation for Warren, a token of the high esteem in which he is held throughout Welsh rugby.”

Gatland, 56, said the stadium will always hold a special place for him.

“It evokes a host of wonderful memories and has been the location for some of my very best days in rugby.

“It embodies all the emotion that goes with winning big games, but also the hard work, dedication and passion of everyone involved at every stage from players to staff and to my own family and to the fans themselves.”