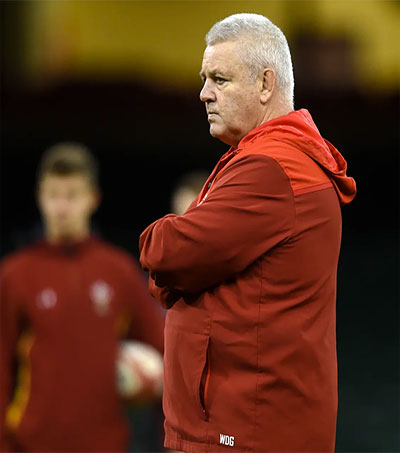 “For all his success in his coaching career, Warren Gatland is no José Mourinho peering into the mirror all the time and trading on past glories. He looks ahead rather than back, plotting the next conquest,” Paul Rees writes for The Guardian ahead of Gatland’s final match in charge, a win against Ireland 25-7 in Cardiff, and his third Grand Slam victory.

“Gatland has the ability to make scribblers believe they are Shakespeare, that nothing is beyond them,” Rees writes. “They become more than the sum of their parts. Wales may have supplied few highlights to this year’s Six Nations, but what has marked them out from Ireland and England is their ability to clamber back on their surfboard after being knocked off and to ride the next wave.

“They were 16-0 down in Paris on the opening night, as they had been at Twickenham two years before when a contentious late call by a touch judge cost them the chance of a late winning try, only to turn it around. They were behind at the break against England but inexorably chased them down and last weekend they withstood a second-half siege by Scotland. They can play catch-up and they can defend a lead.

“They have not scored more than 26 points in a match, but when they won the grand slam in 2012 their highest score was 27 points in Scotland. They conceded three tries and if that number has doubled this year with one round to go, Wales have been the hardest team to break down with England letting in seven tries and Ireland nine.

“[Gatland’s] Six Nations career started with Ireland and his sacking by them in 2001 is the one stain on his record. He will be succeeded at the end of the year by another New Zealander, the Scarlets’ Wayne Pivac. He is an outstanding coach, but he will need Gatland’s ability to squeeze every last drop out of his charges if Wales are to continue to confound.”