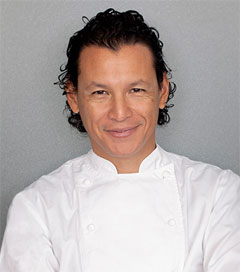 Famed Hanoi chef Bobby Chinn, who was born in Auckland, serves a fusion of his influences – French, Californian, Middle Eastern – with Vietnamese dishes. Restaurant Bobby Chinn is recommended in a Forbes feature called “Explore Hanoi Like a Local”.

“Chinn’s restaurant is located just outside of the city centre near the scenic West Lake. The entire experience is serene because you’ll need to be driven there. And absolutely no street crossing is involved,” the publication writes.

In a Travel + Leisure interview earlier this year, Chinn talked about his most recent enterprise, House of Ho in London’s Soho at which he “bring[s] the bright flavours of Vietnamese street food inside and [gives] them a twist by adding unexpected ingredients like truffle oil to his ceviche and caramel sauce to his monkfish.”

He also owns Bobby Chinn Saigon, which was established in 2011. According to his website, Chinn “lives most of the year in Vietnam and travels throughout Asia, cooking food that has been described by the Asian Wall Street Journal as ‘The best Californian cuisine outside of California’.”