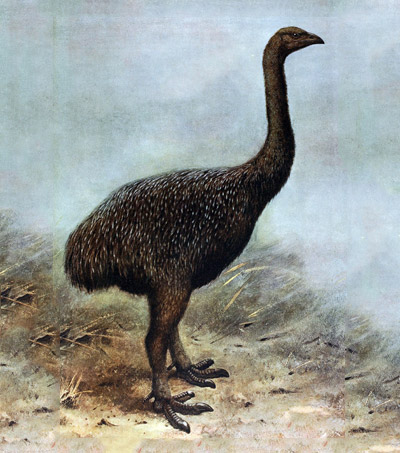 “When the first humans landed on what is now known as New Zealand 700 years ago, they didn’t find mammals. Instead, they discovered giant birds called moas, as well as a host of other indigenous bird species. Soon, they had eaten many of them into extinction,” writes Elizabeth Pennisi in an article for Science Magazine. After “deciphering ancient DNA found in fossilized bird droppings, researchers have a better idea of the toll those extinctions took on New Zealand’s forests and shrublands.”

Moas had a strong hand in shaping New Zealand’s native landscape by helping fungi spread, which were important to the birds’ diets, according to the study. “Now that the moas are gone, “The forest has potentially lost a potentially major way to spread,” said co-author Alan Cooper, an ancient DNA specialist at The University of Adelaide in Australia.

“Over the past decade, Jamie Wood, a paleoecologist at Landcare Research in Lincoln, New Zealand, has found hundreds of fossilized bird droppings, or coprolites, well preserved in caves and shallow sediments across the country,” reports the article.

“More extensive, high-throughput sequencing of DNA found in poop has the potential to reveal much more information,” which is why Cooper, Wood, and graduate student Alexander Boast of The University of Auckland “decided to study in greater detail the DNA from 23 coprolites collected from eight beech forests and shrublands across New Zealand’s South Island.”

“They found a staggering variety of DNA from plants, mosses, fungi, and parasites, whose distribution indicated that each species had its own diet and its own set of parasites, the researchers report today in the Proceedings of the National Academy of Sciences,” reports the article.

Until these findings, “The role of fungi in the diet of New Zealand’s extinct birds has been largely speculative,” said Landcare Research paleoecologist Janet Wilmshurst, who was not involved with the work.

“The fungi found in coprolites are essential to the survival of beeches, and Cooper thinks moas played an important role in helping beech trees expand across New Zealand.”

“Reconstructing even some of the major interactions can provide guidance” about how the flora, fauna, and landscape are connected—and how they may preserved, he points out. Foresters may want to find new ways to spread these fungi as well as plant new seedlings in places where the beeches have disappeared, for instance,” he said.