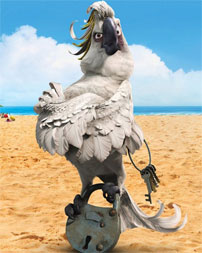 Actor Jemaine Clement is the voice of a villainous cockatoo called Nigel in animated film Rio — The Movie, created by the makers of the Ice Age series. “Talk about ad-lib heaven,” director Carlos Saldanha tells the Boston Globe. “His song is really funny. [Sample lyric, delivered in a Kiwi-inflected samba-rap: “I’m evil/I’ll fill your cheese balls with weevils/I poop on people and I blame it on seagulls.”] Nigel, a former soap-star, is very dramatic and very funny Clement says. “He was once a successful and good looking bird. But his physical appearance changed to reflect his inner evildoer,” he says. “And believe me, Nigel is not a good guy. Any chance he gets to do something evil, he’ll take it.” Rio — The Movie also stars Jesse Eisenberg as the voice of Blu, Oscar-nominee Anne Hathaway as Jewel and other big name artists such as Jaime Foxx and Leslie Mann. Clement is currently filming Men In Black 3.