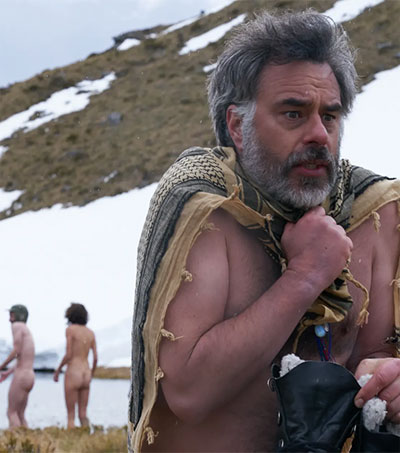 “Imagine writing a film. Rehearsing it in English and then performing it in gibberish. Then, you get someone else to write the subtitles, so even you don’t know how the film will end. Anything else? How about spending the last part of the film in sub-zero temperatures on a New Zealand mountain range next to a freezing lake while you’re completely naked?” Lousie Rugendyke looks for answers in a story published by The Sydney Morning Herald.

Jackie van Beek did all of the above for Nude Tuesday, the “wonderfully absurdist New Zealand comedy set on the fictional Pacific island of Zøbftań that follows a couple whose marriage is in crisis. Naturally, they head to a new-age retreat run by a caftan-clad sex guru called Bjorg (played by Jemaine Clement).”

“Van Beek wrote the script in English, the actors then rehearsed it in English, before switching into the made-up, vaguely sounding Scandinavian language of Zøbftańlik for filming,” Rugendyke writes.

The film is premiering at the Sydney Film Festival in June before its cinema release.

Original article by Louise Rugendyke, The Sydney Morning Herald, May 13, 2022.