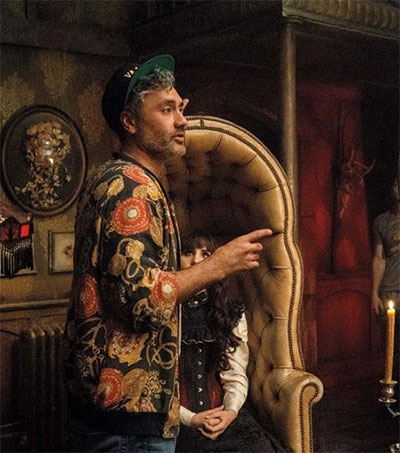 In-demand director Taika Waititi reveals to The Hollywood Reporter what it took for him and fellow New Zealander, Jemaine Clement to develop a TV show based on their 2014 film, What We Do in the Shadows and finding the right tone: “It was about just keeping it real and letting the actors riff without having to censor themselves.”

Before he’d helmed a giant Marvel movie and become one of the most in-demand directors in Hollywood, Waititi co-wrote and co-directed a 2005 short called What We Do in the Shadows. That mockumentary went on to become a 2014 feature that put Waititi and collaborator Clement on the map (they co-wrote, co-directed and starred in the feature), according to THR’s Rebecca Ford.

Now, five years later, their strange vampire universe is the setting for an American TV comedy, and though Waititi and Clement don’t star, their humour and tone are all over the show (they each helmed three episodes and serve as executive producers). Waititi, 43, spoke to THR about bringing back his vampire world, how he directed that star-studded episode and what’s next for the show.

“There are so many cameos in an episode you directed, ‘The Trial’, including Tilda Swinton, Danny Trejo, Evan Rachel Wood – all of whom had previously played famous vampires. Were there others you tried to get?” Ford asks.

“Well, Alex Skarsgard wanted to do it, but he was in Australia doing some movie,” Waititi responds. “We asked a few other people, like Kate Beckinsale; she was out of town. We were still shooting in Toronto and we’d ask, ‘Hey, can you come to Toronto?’ and even if they wanted to do it, it’s a long way to come to do an hour’s work. We did as much as we could there. We shot that about two months after we wrapped the show.”

“Season two is being storylined at the moment,” he says. “My hope is that the characters’ individual arcs and stories get more complex and entwined. I like these characters so much, I want to feel I know them even more intimately. And by intimate, I think you know what I mean.”

Tags: Hollywood Reporter  Jemaine Clement  Taika Waititi  What We Do in the Shadows