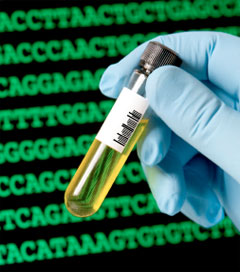 A New Zealand forensic software invention is changing crime scene investigation across the world, meaning that for the first time police can take samples containing DNA profiles of up to four individuals without reference to known contributors.

Institute of Environmental Science and Research (ESR) scientists John Buckleton and Jo-Anne Bright, in collaboration with Duncan Taylor from Forensic Science South Australia developed the software, called STRmix, which has already been sold to the US Army, and the FBI is in talks to acquire the rights.

Among the crimes it has been used to solve was a multiple-homicide in Australia, where a spot of blood found at the killer’s house contained blood from several of the victims.

Another case, in the United States, proved a soldier rolled a jeep despite his claim it had been stolen from him. A shoe found at the scene contained a mixture of his DNA and another person’s.

In the past all this evidence would have been discarded. Mixed DNA was useless DNA.

The program was put into casework in August 2012 and has since generated “enormous international interest”, Buckleton said.