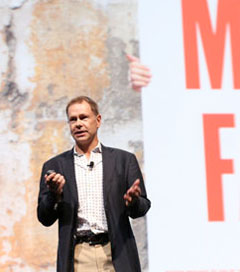 Focus on What You Do Best Says Facebook Exec

As the mobile industry evolves, mobile operators and original equipment manufacturers (OEMs) should focus on what they do best, according to New Zealander Vaughan Smith, vice president of corporate development at Facebook, who was a guest speaker at June’s GSMA Mobile Asia Expo 2013 in Shanghai. Smith told Mobile World Live that “the evolving industry structure” suggests that rather than try to develop new services, traditional mobile players should partner with Over The Top (OTT) players to “offer best of breed experiences”. “At Facebook we learned that if you focus on what you do best, you’ll maximise the value you create for your customers and your business. For everything else we partner. Moving forward, operators have the ability to work with those who have expertise in a specific area to create additional value,” Smith explained. The Facebook executive also predicted that apps will be the area that evolves fastest in the mobile sector, becoming richer and making better use of the capabilities of mobile devices. Continuing the partnership theme, Smith emphasised how app developers can benefit from working with Facebook: 40 per cent of the top 100 grossing apps on iOS and Android use Facebook’s mobile app install ads which drove close to 25 million downloads in the last quarter. Smith added that the two major issues in mobile that stand out are network build-out and bringing data access to more people, with five billion people around the world still not online. “In the last nine years, we’ve helped bring these benefits of connectivity to over a billion people, but the Internet is still not a universal opportunity.” Smith has previously been vice-president of corporate development at eBay. He has a PhD in electrical engineering from Canterbury University.