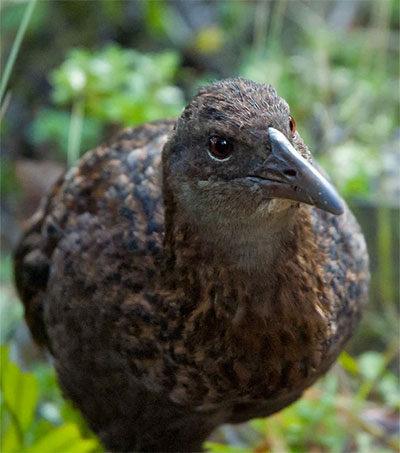 Are Weka Slacking Off in Seed Dispersal?

Humans can be a terrible influence on birds. Crows that live near us end up with high cholesterol, sparrows screech to be heard over oil pumps, and instead of migrating, some storks now just eat trash. According to a study published in Royal Society Open Science, Cara Giaimo writes for The New York Times, New Zealand’s weka have become worse at a crucial task: seed dispersal.

The study suggests that human interaction with weka “could be changing the spatial structure of new plants to a noticeable extent,” said Kim McConkey, an adjunct assistant professor at the University of Nottingham, Malaysia, who was not involved in the study.

Weka, ground-dwelling birds found in New Zealand, have long bills, big stomachs and gizzards full of grit. They have no problem swallowing seeds, even big ones – like those in the fruit that falls from New Zealand’s hinau and miro trees, which can be about a centimetre in diameter. In fact, weka are critical seed dispersers for large-seeded plants like these, bringing them into new areas by eating their fruits, moving around and then excreting the seeds. Being spread out in this way helps the plants to avoid pathogens, and allows them to grow without competing with each other for space, nutrients and sunlight.

Weka are also bold and curious, and eat many things besides fruits – including invertebrates, the eggs of other birds and human food, said Dr Jo Carpenter, a postdoctoral researcher at Manaaki Whenua Landcare Research and the lead author of the new study. Many New Zealand picnickers have left their lunch unguarded for a moment only to have it snatched by a weka.

The birds will even “steal a sock, or a teaspoon,” said Carpenter, who was a researcher at the University of Canterbury in Christchurch, when the study was conducted. “They are real rascals.”

Last year, she began to wonder: Are the weka that hang out with people slacking off when it comes to seed dispersal?

Researchers combined two data sets, and used them to run simulations modelling how far the birds might carry the seeds. In these simulations, weka living in the forest moved seeds an average of 50 to 350 metres. Campsite-dwelling birds were less impressive. On average, they carried seeds only about half as far as their forest-roaming peers.

In a conservation landscape that sometimes excludes weka from sanctuaries because of their omnivorous habits, it’s an intriguing twist, Carpenter said.

“I think we’ve really underestimated weka,” she said. But “we’re impacting how effective they are.”