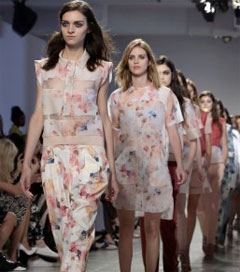 New Zealand-born designer Rebecca Taylor “put old-school American work wear to work” in her Spring 2014 show at New York Fashion Week on 7 September. “Never mind that she normally dresses young women who can get away with fluttery miniskirts every day of the week, Taylor went for it and it mostly paid off,” Associated Press reported from the catwalk.

“The crowd in the Chelsea gallery also saw some ‘80s influences and tapped their feet to a remix of [Neneh Cherry’s] ‘Buffalo Stamp’, a 1989 dance hit.”

Taylor lives in New York. Her retail outlets include boutiques in Japan.