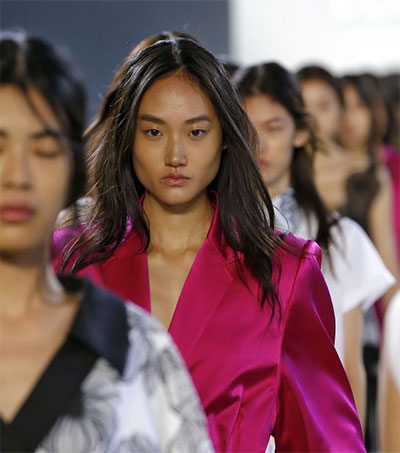 A lack of diversity in the fashion world means that all too often, there might be just a handful of non-white models to take the runway at a Fashion Week show. But not at the first-ever runway show for Claudia Li. The New Zealand-born designer showed her Spring 2019 collection at New York Fashion Week and cast a line-up of exclusively Asian models to show it off.

The designer’s statement-making show was a win for diversity in the industry, and Li says it was a particularly important move for her first runway show.

In the past, Li has done presentations, but this was the first time she sent models down the catwalk, picking 25 Asian women to do so.

“The casting is quite personal and I’ve been talking to my casting director about doing something like this for a while now,” Li told US fashion site Refinery29.

She worked in oversized blooms in tribute to her mother’s garden, hand-drawing the patterns herself as they were applied in prints, embroideries, and hand-stitched appliques.

There was some star power in the front row, too: Rapper and actress Awkwafina, who currently stars in Crazy Rich Asians, was on hand for the show.

Prior to her professional career as a womenswear designer at J.W. Anderson, Li worked at Haus of Gaga under Brandon Maxwell. She studied at Central Saint Martins before obtaining her MFA in fashion at Parsons School of Design. In 2017, Li was a finalist for the International Woolmark Prize and was a Forbes 30 Under 30 honoree.

Li is based in New York.