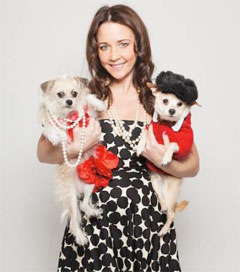 New Zealander Paul Nathan, has become a kind of society photographer for the doggie couture crowd and has documented furry fashionistas in his book Couture Dogs of New York, which came out earlier this year.

Americans spend an estimated $55 billion annually on their pets, and last year they dropped around $370 million on Halloween costumes for their animal friends.

Ilene Zeins, a real-estate agent from Brighton Beach, says her dog Zee Zee is just getting out of a relationship. “He just wasn’t the right match,” Zeins explains. “He was just a sweatshirt kind of guy, but Zee Zee needs someone who’s going to walk her down the red carpet.”

Nathan calls out encouragement to Zee Zee and his other largely unaware subjects. A PR consultant scouts for talent. Bored interlocutors don’t so much scan the room as sweep the floors, looking for some dog outfit to critique.

The canine fashion scene is often, for lack of a better term, catty.

Nathan was born in Auckland. He has studied at Sotheby’s in London and the International Center of Photography in New York, where he was awarded the Herbert Keppler Scholarship.