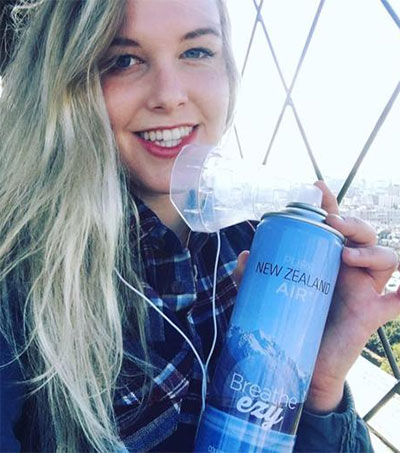 Farming Our Air for Chinese Market

Pulling a trailer packed with dive tanks and a compression motor, the three co-founders of Breathe Ezy drive around the scenic mountains and valleys of New Zealand’s South Island collecting air Phillip Duval, Xu Yang and Gerry Walmisley are air farmers – or air harvesters as they prefer to be known – making money from fresh air.

They’re not the first – and probably won’t be the last – entrepreneurs to try and turn China’s chronic air pollution into a business opportunity: in their case by selling cans of New Zealand air.

China has been experiencing extremely bad pollution in recent months, with a third of the country’s cities issuing red alerts.

Pollution leads to a range of health problems, and was the cause of more than 1 million deaths in the country in 2012, according to the World Health Organisation.

Duval, Xu and Walmisley came up with the idea of selling air a year ago during a business trip to Xingtai in Hebei province, a heavily polluted coal mining city, to promote New Zealand wine.

“Yang quipped it would be nice to have some New Zealand air, so that was the germ of the idea,” said Duval, a trained lawyer who has dabbled in real estate, education and wine exports.

Noting the success of Canadian start-up Vitality Air, which had been selling Canadian air since 2015, and buoyed by New Zealand’s clean image, as portrayed to the world in the Lord of the Rings film trilogy, Christchurch-based Breathe Ezy began selling 600ml air cans in June, each offering around 150 breaths of air.

Users attach a plastic inhaler to the top of the tall blue aerosol cans that sport a picture of the country’s mountains, then press and inhale.

The company found adapted diving equipment was the best way to compress eight litres of air into 600ml cans.

In 25 minutes, they can fill two dive tanks, or 400 canisters. Sporting ear muffs to drown out the sound of the compressor, the three could pass for gardeners. The air is filtered three times to get rid of any allergens or other impurities such as smoke.