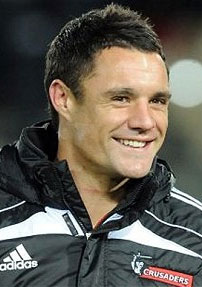 “[Christchurch] is up to its knees in the slurry that oozes through the earth, a city of condemned houses and broken people,” Telegraph journalist Mark Reason writes. “But rugby goes on. This is New Zealand. It is almost impossible to understand how big rugby is in this long and lovely land. Boys’ High has 125 sports coaches. The match against local rivals Christ’s College is televised and the parents are breathalysed before being allowed into the ground. Andrew Mehrtens, Aaron Mauger, Colin Slade, Stephen Brett, almost every recent New Zealand fly-half went to Boys’ High, including, of course, [Dan] Carter. He doesn’t seem like a big man. That is partly because he is shy. Carter talks engagingly for a minute but, as soon as the tape recorder turns on, the superstar stares out at the school in the distance. Stephen Dods, Carter’s old school coach, tries to explain what makes Carter special – so special that Graham Henry thinks he might just be better than Bev Risman, Barry John and Mark Ella, the best that he has seen. The answer seems astonishingly simple. ‘He always knew where he came from,’ Dods says. ‘Dan still hangs out with the guys he grew up with. It’s phenomenal.’”