Anika Moa, Boh Runga and Hollie Smith are three iconic New Zealand songwriters and artists, strong women with voices and personalities to match. Their collaboration has produced a breathtaking album that showcases beautifully crafted songs and their unique yet complementing voices.

In early 2012 the three friends were sharing a bottle of wine (or two) and musing over the possibilities of making music together. It was idle chat, but something stuck and when they met again a few weeks later they tentatively started writing. The songs, like the wine, poured forth. Boh recalls that creative process as “what being a musician is all about for me. We loved vibing off each other and exploring the dynamics of our relationship”.

In October 2012 the trio took their new songs and tested the waters of performing live together on the annual Church Tour. It was a triumph, a massively successful sold-out voyage around the country, greeted by rave reviews and standing ovations. As Hollie said “we just loved sharing what we had created and seeing it come together on stage with an audience. And we had the best time being on the road together. Everything just clicked”. Anika, Boh and Hollie knew that together they had something special happening.

The three artists entered the Lab recording studio in Auckland to record their new songs in November, joined by musical wunderkind Jol Mulholland (who played guitars and co-produced the album with the trio) and their long-time, trusted bandmates and friends, Tom Broome (drums), Godfrey de Grut (keyboards) and Chip Matthews (bass).

Their song ‘Be Mine’ was their first single together and the album ‘Peace of Mind’ is the realisation of what these three talented and diverse artists, each very successful in their own right, created together. The songs are timeless, the three voices soar together, the harmonies are seamless and natural. Anika puts it best: “it is magic and unique and it’s something we’re all just really proud to put our names to.”

The band name might just be the sum of their parts, but the music they have created together is something much more.

‘Peace of Mind’ went on sale February 1st, 2013 and is available on iTunes. 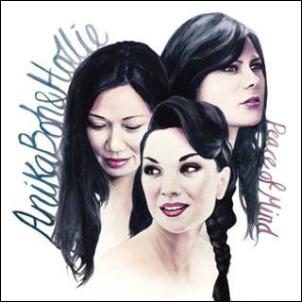 Sophie Mashlan is a young New Zealand folk musician, who has “been rapidly gaining attention for her enchanting performances and evocative songs,” as…

Jess B – Take It Down