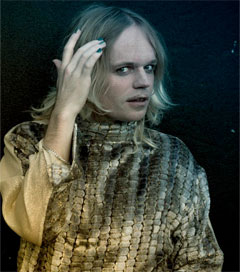 “A defining sense of optimism and curiosity took [New Zealander Connan] Mockasin and his then band, The Mockasins, to London in 2006, where, despite running out of money very quickly, their initial style of psychedelic 60s beach pop caught the attention of various indie labels,” John Thorp writes in a feature article for UK magazine, The Skinny.

“But that was then, and this is now, with Mockasin having recently finished his beautiful, occasionally beguiling follow-up, Caramel, recorded in a nameless, faceless Japanese hotel room and released as quickly as possible at his own insistence.

“‘Working out of a studio, there’s almost too many options,’ he explains when asked why he chose to record Caramel alone in that aforementioned Japanese hotel room. How did the management take to his unscheduled residency? ‘We kept it pretty quiet in the room, it’s all just me really.’

“Occasionally throughout, chattering female voices float into the mix, as if the listener is inadvertently tapped into a strange, faintly melancholy party. The music on Caramel utilises a four-track, Mockasin’s bluesy guitar, a microphone and little else. ‘I like to try and make it sound as good as it can with as little that I’ve got,’ he says. ‘Keeps it exciting.’”

Mockasin is on tour in Europe and the UK.