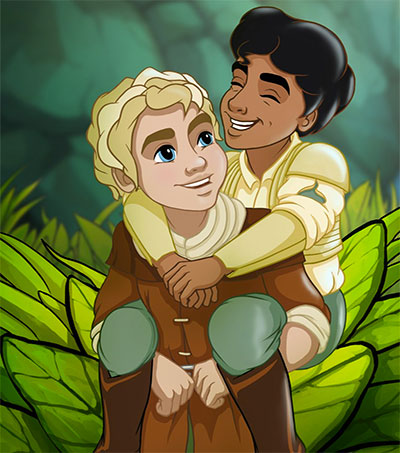 Everyone Should Read This Fairy Tale

“Now, it’s available to buy and it’s something every one should read,” Fasanella writes. “The beautifully-illustrated story tells the tale of an equality-driven kingdom where a young prince and a farm boy foster a friendship that eventually grows into true love. The only problem? When the queen gets remarried, her evil new husband wants to reign over the enchanted forest and the sacred land the farmer boy’s family is responsible for protecting. It’s a tricky situation, to say the least, but nevertheless seeks to teach children about the significance of equality, loyalty, and ultimately: love.

“Co-author Reynolds mused on what motivated him to work on the project, saying, ‘I wanted to create the kind of story I wish I’d had growing up, one where the sexuality of the characters was not the defining focus, or a reason for any conflict.’

“Harris explained how important it is for kids to see a positive portrayal of LGBTQ characters in the media:

“‘If you don’t see yourself in stories, you don’t see yourself in the world. I grew up without any stories to show me that “happily ever after” could even exist if I was gay. That makes coming to terms with your sexuality a very isolating and traumatic experience for many young people. With everything happening in the world right now, we need to change the message of fear and intolerance towards anyone who is different.’”

Promised Land is aimed at children aged from five to 10.

The book is dedicated to the 49 people murdered in a gay nightclub in Orlando, Florida, in 2016.