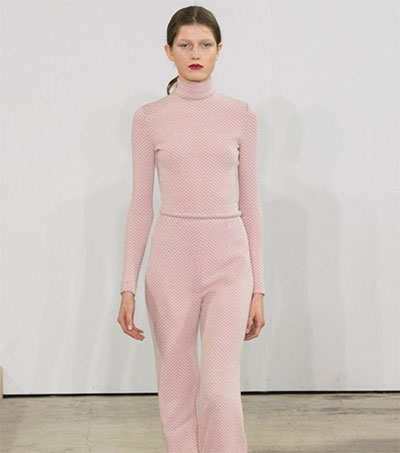 “There was a feeling that London Fashion Week finally got started at the Emilia Wickstead show,” Kate Finnigan writes for the Telegraph. “The New Zealand-born designer, now firmly established in London, is an impressively self-made woman whose upscale taste and seamless tailoring skills early on attracted a high-end clientele that has now been built into a list any design house would be envious of.

“And when Alexa Chung is on the front row, alongside Natalie Massenet, the ‘freshly-Damed’ founder of Net-a-Porter, one knows a label has a certain cachet.

“Top of the address book is the Duchess of Cambridge, who has worn a number of dresses and coats designed by the mother-of-two. While the Duchess favours the more conservative styles and pastel colours that have long drawn Wickstead’s most loyal personal customers, for her catwalk shows the designer always demonstrates a kookier or more dramatic tone.

“This winter’s offering stayed with the late mid-century silhouette that Wickstead offered last season but added more volume, cosier textures and deeper colour. Imagine you are the moneyed wife of a business man invited to a posh November dinner party in the middle of the 1973 oil crisis. This is what you would wear. A high-necked, long caped gown in horizontal stripes of brown, lime green, blue and purple was the striking first look. Swoony, if a little de trop for the Palace’s tastes.

“With her huge gathered skirts, voluminous sleeves, discreet cut-outs and luxurious textures, Wickstead has mastered contemporary grandeur – no easy thing to do. When her new shop opens on Sloane Street next month she should expect that high class client list to swell.”

The lines between jewellery and accessories are blurred in the hands of New Zealand-based jeweller Jasmin Sparrow, who plays with materials and forms for romantic, vintage-inspired designs, Hannah Silver reports for…