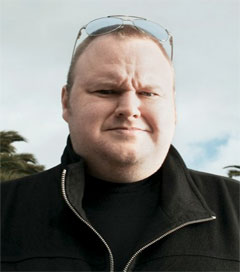 From his home north of Auckland, former hacker and internet cult hero Kim Dotcom, tells the Guardian his eyes have been opened to US tactics after his Megaupload site was shut down last year. “Almost a year after the internet entrepreneur and several of his associates were arrested in a spectacular dawn raid on the mansion, about 200 invited guests will gather at the opulent estate for the launch of Mega. The German-born tycoon is clearly more than willing to be cast as the courageous leader of a crusade against the dinosaurs of Hollywood and the politicians who enable their obsolete ways of doing business. ‘We want to show the world that we are innovators,’ Dotcom says. ‘We want to show the world that cloud storage has a right to exist. And, of course, when you launch something like this, you can expect some controversy.'” In a statement reported on TV3 the Motion Picture Association of America (MPAA) said “Kim Dotcom has built his career on stealing creative works. He has undermined the people who work hard to produce the movies and TV shows audiences love, and has damaged the consumer experience by pushing stolen, illegitimate content into the marketplace. We’ll reserve final judgment until we have a chance to analyze the new project, but, given Kim Dotcom’s history, count us as skeptical. If Kim Dotcom plans to structure his new service to intentionally blind it to infringement taking place there, that alone won’t protect him from liability for Mega’s role in stealing creative works.”