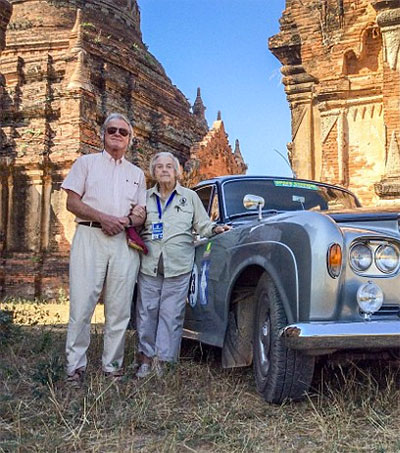 Dorothy Caldwell, 97, to Race Across N America in Rolls

New Zealander Dorothy Caldwell, 97, believed to be the world’s oldest rally navigator will race over 9500km across North America guiding her 72-year-old son, Alastair, through the 22-day trip for the Endurance Rally Association’s Trans-America Challenge.

They will travel in a 1963 Rolls-Royce Silver Cloud III for the duration of the event, which starts on Canada’s East Coast in Halifax, Nova Scotia, and ends on the West Coast of the United States in San Francisco, California on 28 June.

Caldwell took part in the first Trans-America rally in 2012 with her son, a former manager of the McLaren Formula One team, and has also accompanied Alastair on a rally in Burma.

As navigator, Caldwell – who was awarded the prize for “Spirit of the Rally” on the 2012 Trans-America Challenge – looks after the maps, updates and trip meter.

The role requires a constant state of being alert, as the rally route takes the vehicles along a difficult route through tough terrain.

Away from navigating, the pensioner splits her time between a home in Maidenhead, Berkshire, and another property in Hamilton.

Caldwell, who is a naturalised New Zealander, after moving there from the UK in 1950, said: “When we lived in England, my family was into racing, my brother did it, and then both of my sons in New Zealand.

“The first rally I did with Alastair was in Suffolk in 2011. It seemed like quite a simple thing to me, so when he asked if I would navigate for him on the first Trans-America Challenge back in 2012, I said I would.”