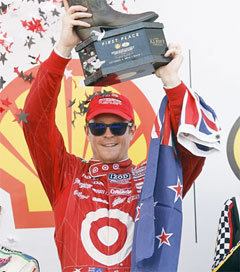 New Zealander Scott Dixon has claimed his third IndyCar championship, regardless of a fifth place finish at the Auto Club Speedway in Fontana. Dixon won the title by 27 points over Power teammate Helio Castroneves.

“I still can’t believe that we’ve actually won the championship,” the 33-year-old said. “It just means so much.”

Castroneves finished sixth, one lap down to the leaders.

Dixon entered the race with a 25-point lead over Castroneves in the championship standings.