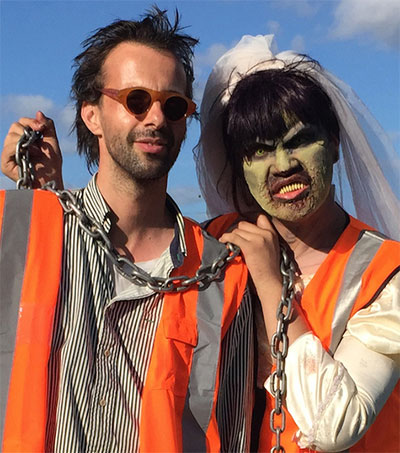 Florian Habicht’s unconventional approach to filmmaking has won him critical acclaim and kept discerning film fans entertained for more than a decade. For his latest project, the Berlin-born New Zealander ventures into the creepy, freaky world of Spookers, a “scream park” located in a former psychiatric hospital in Auckland.

Described as being about “the transformative and paradoxically lifesaving power of belonging to a community that celebrates fear”, Spookers is one of five finalists in the Illuminate Award for innovative documentaries at this week’s Sheffield Doc/Fest 2017.

Illingworth asks, “Who are some of the key ‘characters’? What did you learn about the behind the scenes world of the people who work at Spookers?”

“There’s Huia the clown, Zombina, Juneen. There’s Beth who dreamed up Spookers and runs the place with her husband Andy and her daughter Julia. Andy is the mayor of the Rangitikei District by day, and a masked monster by night,” Habicht says.

“Peter O’Donoghue edited and co-wrote the film in the edit. He also worked on Love Story and my Pulp documentary. Teresa Peters was the art director and designed the sets that we created for the dream sequences. Like the ocean made of cellophane that we blew wind into, Fellini style.

“[Pulp: a Film about Life, Death & Supermarkets] was the opening night film for Sheffield Doc/Fest [in 2014], and three years later it’s still having occasional theatrical screenings around the world. It’s going to have a big open air screening in Vienna this summer, and some big screen events in Berlin.”

“They are both love stories, and will hopefully push my filmmaking to another level. I’ve been itching to make dramas, and I’ve had to learn to become patient with the amount of time scriptwriting takes.”

Original article by Sarah Illingworth, The Huffington Post, May 31, 2017.