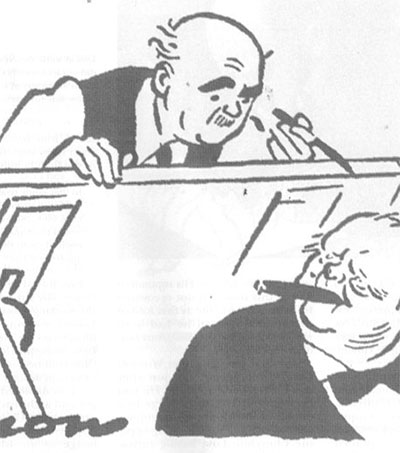 “Churchill’s long career makes a history of his portraits a history of British art from Sickert to Gerald Scarfe. This is the premise of [Jonathan] Black’s book [Winston Churchill in British Art], which ranges over cartoons and photographs as far as Clarice Cliff’s Art Deco Toby jug of 1938-39,” Rosemary Hill writes for the London Review of Books.

“One point on which most of these very diverse artists agreed was that the raw material was unpromising. Low first met [Churchill] in 1922 and sized him up with a professional eye: ‘He belongs to that sandy type which cannot be rendered properly in black lines. His eyes, blue, bulbous, and heavy-lidded, would be impossible. The best one could do with him was an approximation.’

“Low resolved the floating composition into round bulging eyes and the rippling extra chins about which Churchill was sensitive. Portraitists had a harder time of it. Churchill’s features were in constant motion, reflecting a temperament William Orpen described as ‘wax and quicksilver’. Sickert’s oil painting of 1927 best catches that plasticity in an image that recalls the similarly sandy and baby-faced Dylan Thomas.”

Low was born in Dunedin in 1891. According to Wikipedia, he began his career as a professional cartoonist with the Canterbury Times in 1910, before moving firstly to Australia and then Britain, where he accepted a job at the London Star in 1919. Low produced his most famous work during his tenure at the Evening Standard.