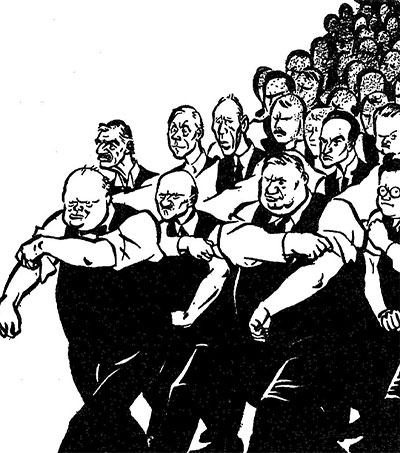 Renowned political cartoonist and caricaturist New Zealander David Alexander Cecil Low, who worked for the Evening Standard from 1927 to 1950, rallied Britain behind the new leader Winston Churchill producing “an inspiring exhortation to resistance whose image would remain embedded in the minds of the British people long after its publication day,” author Roger Herminston writes for the newspaper ahead of his own book publication named after Low’s famous cartoon, All Behind You, Winston – Churchill’s Great Coalition 1940-45.

Low’s cartoon recalls that his patriotic fervour had been stirred to such a degree that it “practically drew itself, at white heat”.

It depicted Churchill, jacket off, shirtsleeves rolled up, marching forward with a fixed, pugnacious look on his face. Closely following him (similarly rolling up their sleeves) were Labour’s Clement Attlee, Ernest Bevin and Herbert Morrison, and behind them the other key Cabinet appointees: Chamberlain, Lord Halifax, Anthony Eden, Leo Amery and Alfred Duff Cooper (Conservative), Arthur Greenwood and A V “Bert” Alexander (Labour), and Sir Archibald Sinclair (leader of the Liberals). Finally, in the wake of the politicians, loomed the ranks of men and women seemingly willing their political leaders on to confront the Nazi danger.

Low had been asked by the Ministry of Information to join the wartime propaganda effort but baulked at drawing illustrations to accompany leaflets dropped over Germany. Later he would be persuaded to help popularise potatoes by Lord Woolton, the food minister, and attract fireguards at the request of Morrison, the Home Secretary. But he was keen to retain his independence at the Evening Standard and All Behind You, Winston was the first in a series of cartoons Low drew in those desperate days of summer 1940.

“Thank God for Low,” a London vicar said from his pulpit in 1940. “Low is one of the three forces that hold us together.” The other two were, of course, Churchill and J B Priestley, whose Sunday evening broadcasts gripped the country.