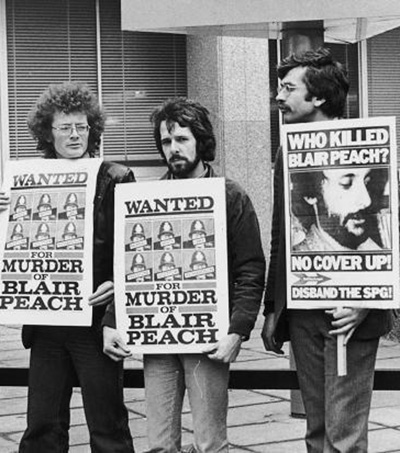 The fight to bring to justice the British police officers believed responsible for the unlawful killing of New Zealand schoolteacher Blair Peach has been given impetus with the publication of a new pamphlet examining new material about the case. International jurist David Renton has this month published Who Killed Blair Peach?, which was previewed in the London Review of Books.

In it, Renton names three officers, one of whom he believes is the man responsible for splitting the skull of Peach in 1979 during an anti-fascist protest.

Peach was resident in Southall, a predominately Asian and Black suburb in which the fascist political party, the National Front, had chosen to stand a candidate in the upcoming election because of the publicity the party would receive.

At a meeting in April, 2,875 police officers, including 94 on horseback, were deployed to accompany the hundred-odd fascists through a protest numbering in their thousands. Nearly 100 police were injured, as were 64 members of the public; 700 protestors were arrested and one killed: Blair Peach.

At the subsequent inquest, police were cleared of wrong-doing but the coroner actively sought to undermine the Peach family’s efforts to uncover the culprit by refusing access to the internal police Cass report into the fatality and instructing the jury that it was possible the Kiwi was killed by a left wing fanatic.

Yet the Cass report, suppressed for 30 years until its release in 2010 following the death of an innocent bystander during the G20 riots a year earlier, clearly states that Peach had been killed by police and there was no evidence of accidental or unwitting use of force.

“It is therefore a matter of consideration as to whether the death was unlawful,” says the report, “there being little evidence from any source that criminal acts were being committed by the demonstrators at the time of the death.”

More recently, a paper the coroner sent to the British Home Office has been uncovered, in which the coroner alleged that witnesses had fabricated evidence, the National Front was blameless in its actions and that the demonstrators were in fact responsible for Peach’s death.

The Home Office suppressed the document. One official wrote in a memo released under the Official Information Act: “It only needs one leak for a great deal of harm to be done – not only to the standing of coroners but also in respect of the home secretary’s decision that a public inquiry should be resisted.”

Renton, who serves on the committee Defend the Right to Protest, writes that “yet more doubt is cast on the original inquest into Peach’s death. Officers E, F and H … should be placed before a jury and required to explain the discrepancies between the accounts they gave [to the inquest and the Cass report].”