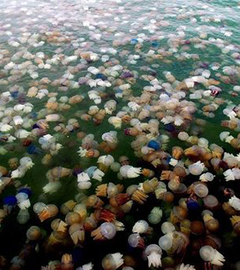 At first it was dismissed as a freak event. In 1998, a mass of jellyfish carried by the tide into Big Glory Bay, Stewart Island, became pinned against the netting of salmon farm pens: “As the jellyfish struggled against the current and the netting, their mucus, which is profuse and packed with stinging cells, was sucked into the cages.” Within 30 minutes, 56,000 3kg salmon were dead.

But New Zealand’s mass fish death was not a one-off. It was the start of a series of jellyfish tides that between 1999 and 2002 killed more than four million salmon in 90 separate incidents, reports Lisa-Ann Gershwin in her book, Stung! On Jelly Fish Blooms and the Future of the Ocean. (During this period, demand for salmon has soared, leading economists to predict that a ‘peak salmon  point’ has been reached).

Theo Tait, reviewing Stung for the London Review of Books, describes Gershwin’s work as one of serious scholarly endeavour written in the style of a monster movie. There is plenty to be terrified of here.

Overfishing of the pest’s few predators (mackerel, tuna, sea turtles, albatross), fertiliser discharge, sewage pollution and climate change are the primary causes of the growing gelatinous tides, argues Gershwin, who has discovered 150 new species of invertebrates during her life-long study of marine flora and fauna.

The blooms have knocked out power stations in India, America, Israel and the Philippines, disabled a nuclear super carrier, capsized an industrial Japanese trawler and, Gershwin says, pose a threat to the very existence of other marine life.

“These masses of decaying carcasses create a zero-oxygen zone of hydrogen sulphide where nothing can survive,” writes Gershwin. “The jellyfish have excluded most other living things by partitioning their vertical and horizontal space into a stingy-slimy killing field impacting over 30,000 square nautical miles.”

Of 45 large marine eco-systems, jellyfish numbers are increasing in 28, stable in 12 and decreasing in only two. The number of oceanic eutrophic dead zones has more than quadrupled since the 1990s.

The outlook for the vast oceans of the world is “essentially apocalyptic,” what reviewer Tait calls a destruction of the global commons but underwater. Despite Gershwin’s lurid prose, her science paints a clear picture of the present danger, he says, where any action taken now is probably too late.