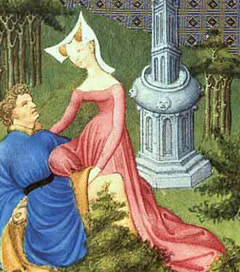 New Zealander Constant Mews’ academia-shaking discovery of the lost love letters of legendary lovers Heloise and Aberlard is being defended in the London Review of Books after a new book cast doubt on their authenticity. Dr Mews’ discovery in 1974 at Auckland University library, of all places, of a collection of medieval love letters that he attributed to the star-crossed pair was truly a global event for historians, religious scholars and philosophers.

It catapulted Heloise, already mythologised in art and literature for  more than 900 years, into the upper firmament of history’s greatest revolutionary thinkers and philosophers. Even after a near-millennia, her beliefs have the capability to shock modern sensibilities.

Heloise disdained traditional female roles, was one of the 12th Century’s great scholars, demanded equal treatment, refused marriage and considered babies beneath her: “What woman will be able to bear the constant filth and squalor of babies,” she writes in castigating her lover’s offer of marriage.

“The name of wife may seem more sacred or more binding … but sweeter for me will always be the word mistress, or, if you will permit me, that of concubine or whore.”

Her attitudes to sex are more fourth wave feminism than second-wave bra-burning.

“If Augustus, ruler of the whole world, deigned to honour me with marriage and conferred on me the whole world to possess forever, it would seem worthier to me to be called your prostitute than his empress.”

Heloise and Aberlard could not still the desires of the flesh, once coupling in the refectory of Argenteuil Abbey during Holy Week. Of course, it ended badly. There was a child and a wedding, forced upon her. Her uncle’s henchmen castrated Aberlard, whose compositions survive in the Carmina Burana, and Heloise ended up as Abbess in a nunnery.

Even so, she is tormented during mass of lewd visions, so “that my thoughts are on their wantonness instead of on prayers”.

David Luscombe, in his new book, The Letter Collection of Peter Aberlard and Heloise, critiques Mews’ discovery and decides on balance that they are likely not the famous lovers. But UK academic, author and LRB reviewer, Barbara Newman disputes his finding – the argument centres around the correct usage of various gender-inflected Latin – and asserts the primacy of the New Zealander’s great coup.

“After nine hundred years, this astonishing woman is still full of surprises,” Newman writes. “The second authenticity debate [about the letter’s authors] is very far from over, and when the dust settles once more (I’m not holding my breath), we may need a yet longer edition that traces the couple‘s tangled relationship from the first stirrings of passion through their parting, tragedy and re-engagement to a spiritual partnership as exceptional as their love.”