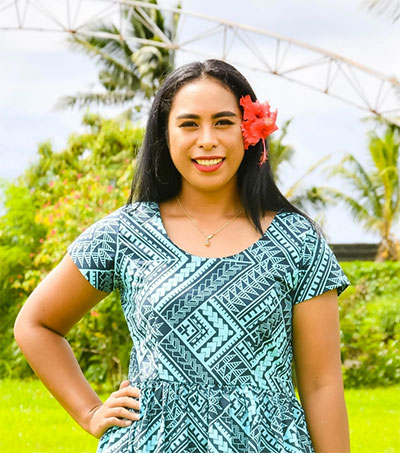 New Zealander Amy Maslen-Miller is a new kind of researcher focused on indigenous agriculture. Young and passionate about what science can bring to food security, she is also keen to understand traditional approaches to agriculture – and bring the two together.

Maslen-Miller’s pathway was established thanks to programmes at the University of Auckland building support for Māori and Pasifika students – along with lecturers bringing indigenous practices into the courses.

Today, she is with the Scientific Research Organisation of Samoa researching taro, a root vegetable that has a strong link with traditional farming. Problems with fungus have impacted production and economic opportunities for farmers. Through scientific research, Maslen-Miller is hoping to support Samoans to continue farming the vegetable.

Beyond this, Maslen-Miller is hoping to find new ways of connecting with her Samoan ancestry and bring traditional methods of Pacific agriculture to contemporary science.

“I was brought up the Kiwi way and had no understanding of Samoan culture,” Maslen-Miller said. “It was only during university that I wanted to learn more about the Samoan culture.”

The University of Auckland’s support is not only important in introducing the association between indigenous culture and science – including in the use of plants, which Maslen-Miller described as a “light bulb moment” – but also in ensuring Māori and Pasifika students are supported to pursue a career in their chosen field of study.

By ensuring indigenous culture and practices were part of university courses, students could make connections between heritage and science.

“I can now clearly see how the work of agriculture can impact places like Samoa in food security,” she said. “That shows the importance of the work we are doing.”

Under the moniker of “Samoan scientists”, Maslen-Miller is encouraging young Pasifika women such as herself to pursue a career in science, as well as to educate scientists and government on the value of considering indigenous approaches in research and policymaking.