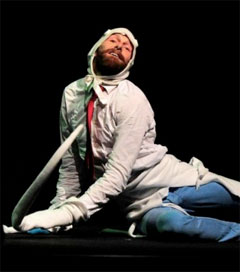 Winner of the Best Performance at Auckland Fringe 2013, the surreal one-man show sees him don a charming costume and use his bendy limbs, miming and clowning skills to embody the carefree cephalopod.

“It’s mostly just an hour of me being ridiculous in a squid costume with a very loose narrative of a fisherman’s identity crisis,” Wakenshaw says. “I was really interested in imagination and seeing how much I could play with the audience’s imagination.”

Squidboy also enjoyed a sell-out season at Edinburgh Fringe, where it was nominated for a Total Fringe Award and hailed “the cult show of the Fringe” by the website Fringe Review.