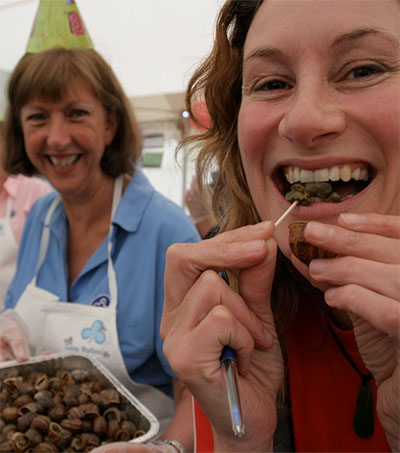 On the Culinary Festival Trail Sampling It All

At this year’s Wildfoods Festival, “an annual gathering of culinary aficionados in Hokitika, a small town on the west coast”, the Washington Post’s Reid Wilson and his wife, sample “shark, kangaroo, alligator, crayfish and whitebait, a particularly disgusting little baitfish that passes for a delicacy in New Zealand.”

“Wildfoods is just one in the seemingly endless parade of festivals, celebrations and anniversaries that draw visitors to small towns around New Zealand during a season that lasts from spring to late fall,” Wilson writes. “During a three-month adventure that took us through the country last year, my wife and I found ourselves at several such events, all of which told us something about the region where we were staying at the moment.”

At the Havelock Mussel Festival, “which draws shellfish fans to the self-proclaimed green-lipped mussel capital of the world,” Wilson watches local chefs speed-shuck hundreds of mussels and “enthusiastic eaters prepare to wolf down a dozen mussels and half a pint of beer.”

“New Zealand is one of the most isolated places on Earth, which means that it must import much of its food and durable goods from overseas. That fact must also inspire in Kiwis an instinctual pride in the goods they produce on their own land. The resulting festival culture means that the entire country spends most of its year in happy celebration.”

Original article by Reid Wilson, The Washington Post, May 9, 2014.