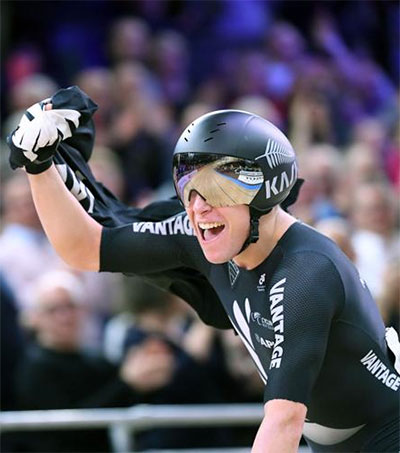 Southlander Corbin Strong, 19, was laid up in a back brace two years ago, stitches holding together a gaping wound in his leg. He had been training on a back road when a car crash knocked him out of cycling for two months. Last week, the Associated Press reports, Strong was standing on the top step of the world championships podium. His story features in Texan newspaper, Odessa American.

Strong lapped the field early in the points race on Day Three of the track cycling worlds at the Berlin Velodrome in Germany, then maintained his lead with crucial points in the intermediate sprints. He capped his dominant ride by shaking loose with Sebastian Mora and Victor Manakov to lap the field again just before the end of the race to win the gold medal.

It is the first time a male New Zealand rider has won a points race world championship.

“I can’t wait to call my parents and talk to my brother and sister. It’s pretty special for me,” said Strong, who already had won a silver medal as part of the New Zealand pursuit team. “They’re all watching. I come from a small town at the bottom of New Zealand and everybody is just going to be so happy for me.”

“Every Olympic cycle has one and every Olympic team needs one – a young kid coming through the ranks really talented that doesn’t know anything better other than going hard at things, who handles himself really well with his teammates despite the fact that he is new to the group and is obviously incredibly talented and hard-working,” Barras told Stuff.