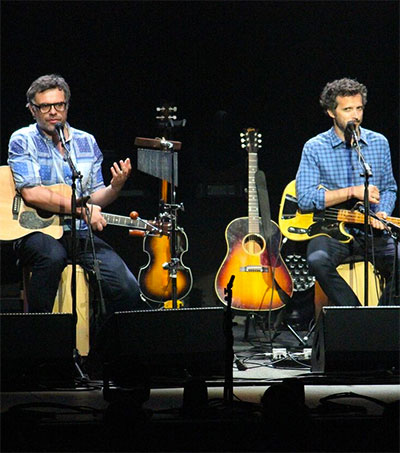 Conchords Kick Off US Tour on High Note

“The duo kicked off their show immediately following an animated opening set by the comedian Arj Barker (who played Dave on band’s self-titled HBO series) with a song about party chips and dip,” Scene Cleveland’s Samantha Fryberger writes in a review of the show.

“It was the first of seven new tunes the band played throughout the course of its witty and highly entertaining 13-song concert (14 if you separate the mashup of “Hurt Feelings” and “Mutha’uckas”), asking the audience not to record them with their phones since there was a good chance they’d forget lyrics at one point or another and that’s not how they wanted fans to remember the night.

“Bret and Jemaine didn’t just add 50 per cent new material to the show, they also brought along the New Zealand Symphony Orchestra (consisting only of expressionless, wild-haired cellist Nigel Collins) as well as a few new instruments: a Vibraslap which they noted was ‘traditionally not very popular on songs’ and a set of hanging chimes that Jemaine occasionally would play using the headstock of his guitar for dramatic emphasis.”

The Conchords head north across the border for a show in Vancouver on 23 June before two nights in Portland at the Keller Auditorium on 24 and 25 June.