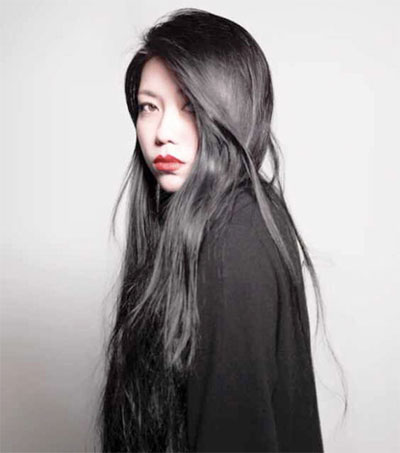 Before her official New York Fashion Week debut, New Zealand-born designer Claudia Li was unexpectedly peaceful – aside from the preshow jitters. “Everything was done two weeks before the show,” Li told news site Fashionista while backstage with her quietly composed team. “I actually told the models to walk like they’re on the beach, very relaxed.”

For a young designer, Li already has a strong vision for her namesake line, and it showed in her premiere collection, filled with airy knits and lightweight fabrics detailed with handwoven yarns from Italy.

Li also showcased her first foray into footwear with white leather slippers, because “it’s just impossible to find the perfect simple slipper.” In addition, she debuted handbags with the Nui clutch. According to Li, nui means “giant” in Maori and her clutch is just that – large enough to fit a 15-inch Macbook.

The Nui clutch looked more like an artwork than an accessory, and that’s because Li didn’t initially study fashion design. Her background is in painting with a bachelor’s degree in Fine Arts from Auckland and Beijing.

“When I was young, I always wanted to be a fashion designer. It was something in my bones.”

To make the switch, Li moved to London and took a few design courses at Central Saint Martins, where one of her pattern-making instructors encouraged her to go to Parsons. She then moved to New York City to pursue an MFA in Fashion Design and Society. “It was a tough but very good experience. It totally changed me design-wise. It was like rebuilding myself.”