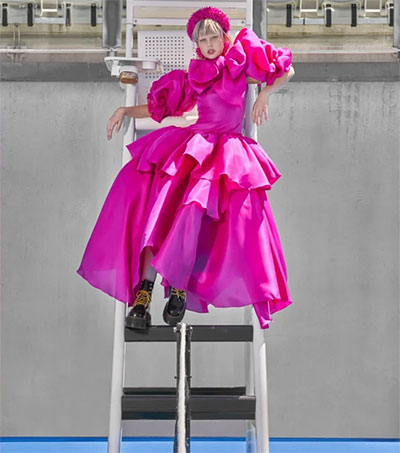 Since founding her namesake label in 2015, New Zealand-raised Claudia Li has emerged as one of the most compelling designers on the New York fashion circuit, Mario Abad writes for independent fashion magazine, Paper.

Her collections are known for their intimate storytelling approach, with each season expressing something personal from her upbringing as designer who was always surrounded by art.

The brand’s Fall 2021 collection, which was unveiled in February, expanded on Li’s New Zealand roots, where she happened to be based for the past year, Abad writes.

She drew upon the joyful mood of her high school years, particularly the school balls.

Her latest collection, called “Homecoming”, incorporates those references in subtle and direct ways, from the big ‘80s puffy sleeves and billowing dresses to the meticulous folds, tucks and draping seen throughout.