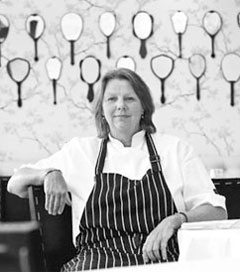 Having cooked at some of Auckland’s top restaurants, Fay is now ensconced at firm favourite Parnell’s Cibo, where she started as head chef 14 years ago and has been a part-owner for the past 10 years.

While in Beijing, Fay and Cibo’s junior sous-chef, Sam Cottrell-Davies, did “a little bit of sight-seeing, a little bit of eating” both in restaurants and from street vendors, but were mainly been prepping for a six-course degustation they presented to about 120 guests.

She was surprised and impressed by how cosmopolitan Beijing is and said she will definitely plan a longer, less hectic visit to sample more of China’s cuisine.

The country will join her usual travel destinations of Indonesia, Malaysia, Myanmar, Thailand, Laos, Cambodia and Vietnam, where she seeks inspiration and ideas to develop for the menu at Cibo.