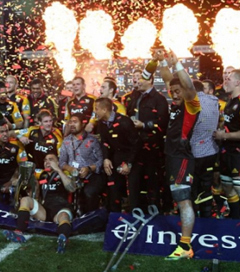 The Waikato Chiefs spectacular 27 -22 win over the ACT Brumbies on the weekend’s Super 15 final have some calling the team a ‘southern hemisphere powerhouse’. The team grabbed 15 points in the space of seven minutes to become only the fourth side to win back-to-back Super titles. Taking control of the game was key to the team’s final quarter win explains Chief coach, Dave Rennie.”We needed to dictate the tempo of that last period and I think we did that very well.”

“We got fantastic impact off the bench… and in the end that was probably the difference,” Rennie said.

The coach, however, has knocked down any idea that the team has become a rugby dynasty. “Dynasty is the sort of thing you reflect back on. We’ve won a couple of titles and next year it will be about realising how hard we’ve had to work to achieve what we have done and trying to replicate that,” said Rennie.

Following their win, the Chief’s performed a victory  Haka, which was specially written for the team back in February, to the delight of a packed crowd of 25,000 at the Waikato Stadium.  Stuff.co.nz reports that “Chiefs head coach Dave Rennie said the team had worked with Huntly’s Ora Kihi from the cultural group from Te Wharekura O Rakaumanga School that performs at all the franchise’s home games, Chiefs Toa, to come up with a haka that embodied all their values and ideals.”