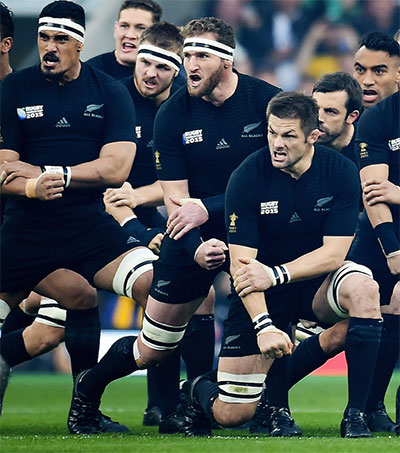 What the Haka Means and How It’s Performed

It’s what representing their country is all about – walking out in New Zealand’s All Blacks jersey, facing their opposition, and delivering a spine-tingling, hair-raising haka before the whistle blows for kick-off. George Ramsay and Alex Thomas report for CNN.

“For me, the haka is a symbol of who we are and where we come from,” former All Blacks captain Richie McCaw told CNN in 2015.

There are many different types of haka, and the All Blacks, arguably the world’s most prolific sports team, perform their own before each game.

“It gets your blood boiling and that’s what you look forward to – the time before the games,” New Zealand lock Scott Barrett told CNN World Rugby last year. “It’s something special, for sure.”

A ceremonial Māori war dance performed before each game, the haka is intended as a challenge to opponents and a rallying cry before heading into battle.

“It has a much wider interest value and a much wider intrinsic drilling into the nation of ours,” New Zealand Rugby’s Māori culture advisor Luke Crawford explains. “When people are asked to stand and identify themselves, often haka is a place that people are comfortable to go to … they will actually utilise that medium as an identifier and a connector back to the land.

“The whole concept around family first, around imploring the higher, that there is something bigger out there and trying to harness that – it all sits well with Māoridom.”

Like a well-drilled rugby team, Crawford adds that the haka requires precision: “Your eyes – are they in the correct position? Is your body? Are you standing correctly?”

A well-executed haka, coupled with a powerful riposte from the opposition, can be more memorable than a game of rugby itself. If the haka is, after all, a challenge, then meeting and accepting that challenge is part of the battle.