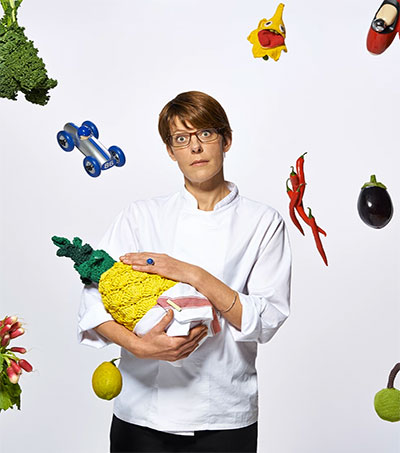 New Zealand-raised chef Anna Hansen, owner of London’s Modern Pantry, talks with the Guardian about juggling the demands of business and family.

Time management is one thing Hansen says she is not particularly good at.

“I guess I do a reasonable job, but it’s actually quite hard doing it effectively,” Hansen explains. “I think flexibility is key, and always being open to change and accepting of change, and if that’s the case then nothing is ever that much of a problem or a chore. The older I get, the more accepting I am of things not going how I necessarily planned.

“It’s constant in a restaurant, because things go wrong every day, from the moment you get in until the moment you leave. Things are going right the whole time as well, but, you know, there are little hiccups, like somebody doesn’t show up with what you’ve ordered, or somebody doesn’t come to work, or a table of five shows up as a ten, or the other way around – so there’s constantly dealing with things like that. And it’s probably one of the key qualities you look for in recruitment in hospitality – flexibility, the ability to work under pressure and be flexible trying to maintain an open mind at all times.

“I think anybody with children would, nine times out of ten, much rather be hanging out at home having fun, because you want to be around this little person that is now in your life. But the reality is that one also has to make a living and create a future for your child, which is how I view opening another restaurant [The Modern Pantry in Finsbury Square opened in September 2015]. Part of me is also thinking, what the hell am I doing, opening another restaurant right now? But I guess you have to constantly challenge yourself – at least, I feel I do – and you want to create something to benefit your family in the long term. I think life is a long series of compromises, because every time you make a decision you had to do that because there are options. That is just part of being human.”

Hansen was awarded an MBE in the 2012 New Year’s Honours List for her services to the restaurant industry.