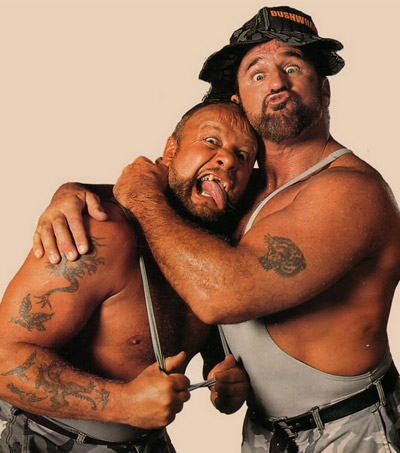 The Bushwhackers Announced For WWE Hall of Fame

New Zealand wrestling legends The Bushwhackers have made the cut into the World Wrestling Entertainment Hall of Fame Class of 2015.

The native New Zealanders who wrestled under the names Luke Williams and Butch Miller will be the first Kiwis in the WWE Hall of Fame, a fact that Williams told Stuff makes him proud.  “I’m like an ambassador for the country,” he said.

Over their 40 year career, the Kiwi duo also wrestled under the name The Sheepherders with other members of their faction.  After competing across their home country and the United States under the NWA banner, their greatest fame came in the then WWF.  The Bushwhackers debuted for the company as it was expanding in the 80s and left in the mid-90s while it was facing stiff competition from WCW.

Even though the team never held a championship in their pre-WWE time, the two wrestlers were fan favorites due to their willingness to feud with anyone and their wacky character tics, such as licking each other’s heads. They clearly were a “comical team” and did not regret having changed their wrestling style to being “faces (good guys) instead of heels (bad guys)” according to Williams.

They’ll be joined in the Hall Of Fame by other wrestling legends including Randy “The Macho Man” Savage and Rikishi.