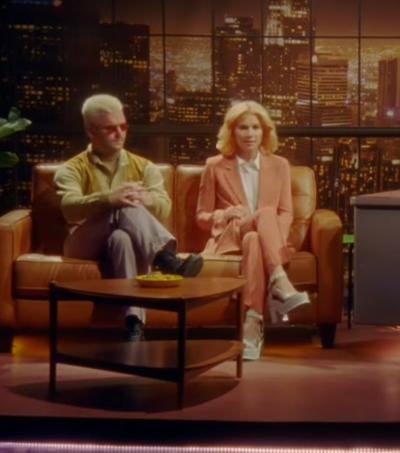 Brother-sister duo “Broods are back with a new music video for ‘Peach,’ marking the first visuals for their upcoming album, which is slated to release in 2019,” writes Erica Gonzales in an article for Harpers’ Bazaar.

“Our aim with this video was to make something beautiful and erratic,” Broods told BAZAAR.com in a statement.

“The song itself is a celebration of chaos so the video had to be just as colorful and strange.”

“In the video, Broods appear to be guests on a ’70s-esque talk show but are frequently interrupted by an absurd set of scenes, including Georgia as a ’90s pop star, Caleb (in fiery red short shorts) eating roasted chicken with the TV hosts, and the pair in a dramatic disco overlay,” writes Gonzales.

They said the project was inspired by real-life music talk show Top of the Pops.

“We wanted it to be cheesy and awkward and nostalgic,” they said.

“The narrative basically follows the different versions of us we can become,” said Georgia. “We think it’s important for us to break away from the moody, monochrome Broods that we used to be and lighten it up a bit.”