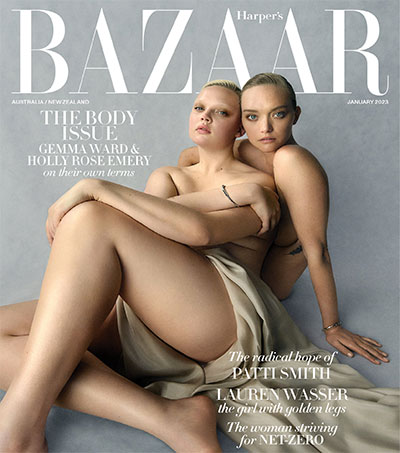 As teenagers, Aucklander Holly Rose Emery (left), who is based in New York, and Australian Gemma Ward both shot to the top of the international modelling industry. Harper’s Bazaar asked them to come together for the first time to share the parallels in their lives and hopes for the future, for a January 2023 cover story.

The two women, now 26 and 35, respectively, had never met before Bazaar’s shoot, but they have much in common. Both women made their international runway debuts at Prada show exclusives at Milan Fashion Week, a decade apart. Both have revealed they struggled to fit the fashion industry’s standard sample size, which can be anywhere under an Australian size 8. And both also found themselves the focus of intense media scrutiny about their bodies, Patty Huntington writes for the magazine.

“We should be moving towards equalising and normalising bodies of all presentations so people can feel safe in existing in the world,” Emery says. “We need to be moving towards questioning and dismantling the outdated ideals of the past. No body is morally superior.”