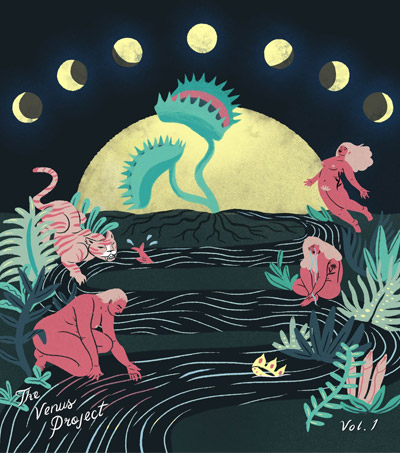 In response to a lack of female representation on stage and in the studio, Georgia Nott – who most people will know as part of the New Zealand music duo Broods – has released The Venus Project Vol 1, a full LP with an all-female crew. Taylor Weatherby reports for Billboard.

“I wanted to celebrate women that are making it happen for themselves in hopes that it would show that there is a place here in the industry for any woman or girl aspiring to be a part of it,” said Nott, 23.

“Additionally, Nott had been writing her own material, which she didn’t see fitting into the Broods catalog.” That sparked the idea of combining “those songs with a group of other talented females”. And suddenly, The Venus Project had begun.

“Nott began hunting for women to recruit, starting with Broods’ keyboardist Camila Mora and manager Sherry Elbe, which began to snowball into finding musical ladies like mastering engineer Emily Lazar and producer Ceci Gomez. The search wasn’t necessarily easy, but that almost made it more rewarding for Georgia,” reports the article.

“Every time we hit a road block, and every time I thought, ‘Why can’t I find a woman to mix the album?’ I was like, ‘This is why I’m doing it, this is why I have to get this done. Because it just shouldn’t be this hard to find women to collaborate with in the industry’”. Eventually finding mixing engineer Adrianne Gonzalez and visual artist/illustrator Ashley Lukashevsky, “Nott started to bring her side-project songs to life.”

“The 10-track album features Nott’s sultry voice in its rawest setting yet. The vocal-driven songs offer a sound as poignant as the lyrics, which cover a combination of feminist issues (“Need a Man”), vulnerability (“Go Easy/Hey Love”), and struggling with self-worth (“Numb”). With topics that intense, Nott isn’t sure she could’ve done this all on her own,” reports the article.

“I just don’t think I would’ve had the lady balls to put it out. I have a slight addiction to proving myself, my anxiety, and my fear wrong and beating it, [but] I think if this was a few years ago I never would’ve even had the confidence to do this project – or start this project,” said Nott.

“Broods has played a role in Nott gaining at least a little bit of that confidence, especially because her brother is her No. 1 fan,” writes Weatherby.

“When I first came into the industry, I was this young girl that was so anxious about everything and felt out of place. The biggest thing that I noticed during this project was just how much of a boss I got to [be], instead of always feeling like I was [just] this girl that could sing. I’ve never been asked what I think so many times!”

“I feel like I found a new depth to myself that I’ll most definitely express for the rest of my career,” she said.

“I just want young women to look at themselves and see more than just what’s on the outside, and feel like their substance runs so deep. That they have a right to express their genius and their creativity — and just own it.”