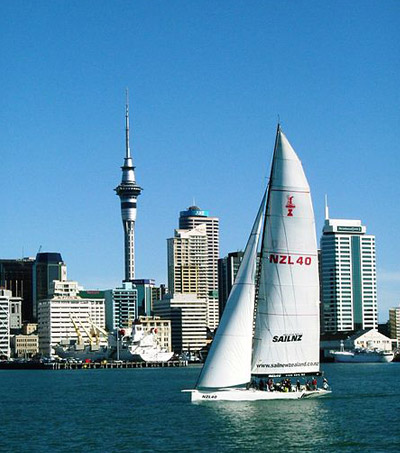 “The construction cranes that pierce the Auckland skyline are a visual indication of the growth New Zealand’s largest city is experiencing,” writes Elaine Glusac in an article in The New York Times. Auckland is laid-back and outdoorsy, but its sophistication shines in its expanding art scene, thriving fashion industry and a new generation of chefs embracing native ingredients,” according to Glusac, who spent 36 hours in the New Zealand city.

Her cultural highlights include the Auckland Art Gallery, which she describes as “great place to get a feel for national concerns and the influence of the indigenous Maori culture on visual art” as well as the Auckland War Memorial Museum which is “devoted to the story of New Zealand from geology to politics.”

She also recommends visiting the ASB Waterfront Theater, home to the Auckland Theater Company, in Auckland’s Wynyard Quarter and taking a walk “on Auckland’s counter cultural side along Karangahape Road, known locally as K Road.”

“New Zealand is known for its Great Walks, nine stunning long-distance trails that span the geographic breadth of the country from coastlines to mountains. These lie far beyond the city, but the new Coast to Coast Walkway in Auckland takes a similarly comprehensive approach to trekking across town,” writes Glusac.

It’s estimated “that one in four Auckland residents owns a boat, and seemingly four in four are sailing fans — particularly after the Kiwi team won the most recent America’s Cup race versus the American team so decisively,” writes Glusac.

“The America’s Cup Sailing experience from the tour company Explore Group (180 dollars) allows amateurs to feel the thrill of a heeling 80-foot boat and the grind of raising the sails on two-hour trips in Waitemata Harbor.”

“For an extra dose of tranquillity hop the ferry to Waiheke Island, where culture meets nature over 35 square miles of scalloped beaches, vineyard-planted hillsides and welcoming art galleries,” according to Glusac.

In her 36 hours Glusac sampled a number of different Auckland restaurants. She recommends Pasture restaurant in Parnell, Amano and Ortolana in Britomart District, North Park Restaurant and Bar and Soul Bar and Bistro at Wynyard Quarter and the Viaduct Harbour. Jefferson, a moody club tucked away in the alley-like Fort Lane is a great place for a night-cap, according to Glusac.

“Coffee-crazed New Zealand is a country where you can find a barista at a rural gas station. Espresso bars seem stationed on every corner in Auckland, but when it comes to caffeine and the accompanying breakfast it’s worth the trek to the inner-city suburb of Ponsonby,” writes Glusac. There she recommends visiting Orphans Kitchen as well as green market and restaurant hive Ponsonby Central.