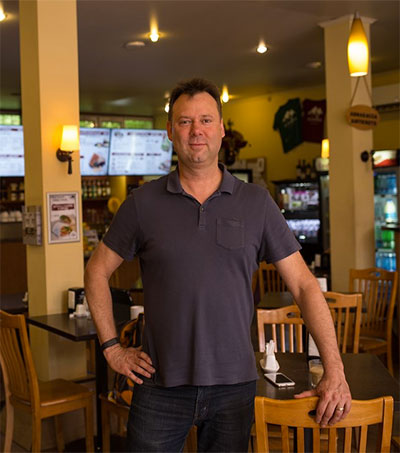 New Zealander Brad Brenneman is often credited with kickstarting the coffee revolution in Kyrgyzstan. He opened the first Sierra Coffee shop next to the Russian Embassy in 2012, two years after another revolution that ousted then-president Kurmanbek Bakiyev and his corrupt family.

Since then, Sierra Coffee has opened eight more outlets in Bishkek, though four of those have closed as Brenneman learned the intricacies of the Bishkek retail market the hard way – everything from stingy landlords to unruly neighbours.

Eyeing the success of Sierra, a competing chain called Coffeeman (since rebranded as Adriano Coffee) opened up multiple locations a few months later, run by the Shin family, a mega-wealthy Korean-Kyrgyz family that has long been influential in the country’s economy, mainly in the ice cream and frozen goods sector.

It’s not just competition from established oligarchs that threatens the new breed of coffee entrepreneurs. Though corruption today is nothing compared to the rackets and seizures that former president Bakiyev’s son infamously used to mastermind, the culture of commerce is still hard to change.

Despite the corruption, bureaucracy is relatively easy to deal with – Kyrgyzstan comes above China, India, Argentina and the Philippines, according to the World Bank’s Ease of Doing Business ranking, including an impressive 29th position on the “starting a new business” sub-index – better than the United States. “I don’t understand why people go out of their way to pay bribes” when getting permits and paying taxes in the first place is relatively easy, Brenneman says.

Brenneman briefly gets up from the interview with online magazine OZY reporter James Watkins to greet the city’s vice mayor, who sits down at the table next to them. “When we first opened, we didn’t have any connections,” he says when he returns. “Now, of course, we have connections.”