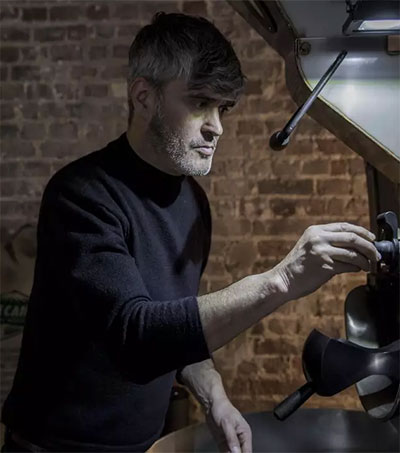 Former chef New Zealand-born Kurt Stewart, founder of Volcano Coffee Works, arrived in London over two decades ago, and was surprised by how little access there was to decent versions of his favourite drink.

“Back then, the emerging coffee scene in New Zealand was quite independent-led with lots of roasteries and cafes and there always seemed to be access to something good – it was the reverse of here. I was thinking: ‘Huh? How does my tiny country with 3.5 million people have so much coffee yet here it’s high-on impossible to find?’” Stewart told London’s Evening Standard.

Determined to find some he could drink, in 2007 Stewart began walking down the path that eventually led him – via his coffee cart business called Full Steam Espresso – to setting up Volcano Coffee Works. Now a roastery with two sites (a shiny new one in Brixton, and another in a West Dulwich warehouse basement, with a shabby chic cafe upstairs), a wholesale business supplying 200 cafes and businesses, and a communal, industry-specific arm called Assembly, Stewart considers this his offer to London of “more interesting coffee”. His team also trains each of his wholesale customers in how to serve it.