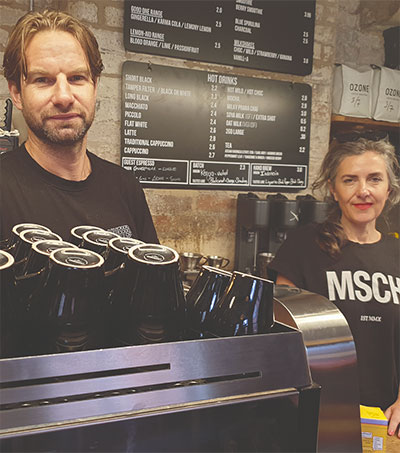 Britain’s coffee culture “owes much to a tiny country on the other side of the world”, according to journalist Alice Geary reporting for Sheffield’s Big Issue North. The high quality coffee on offer at the likes of Sheffield’s Tamper has become such a fixture in our city that few stop to think where the influence has come from, Geary writes.

Outstripping the likes of Costa and Starbucks for flavour and no more expensive – although not cheap – indie coffee shops have flourished in recent years, and it’s been driven in part by aficionados from New Zealand and Australia.

In 2011, New Zealander Jon Perry and his wife Natalie moved to Sheffield and opened Tamper Coffee, capturing the New Zealand tradition of taking time over coffee, not merely grabbing a caffeine hit on the go.

“We lived in Auckland together for about 10 years and we loved the Kiwi café scene,” Natalie says. “I’m from Sheffield, where we met in 1995. We were always frustrated with the lack of cafés in Sheffield when we would come back to visit my family. You just couldn’t get a decent coffee anywhere back then so we decided to open our own.

“I think what is different is the attention to detail. Kiwi cafés just seem to get it all right – unusual but simple products served by knowledgeable and enthusiastic staff.”

Tamper’s success has led to it opening two new locations.

David Burton, owner of Jack’s Coffee in Auckland and president of the New Zealand Speciality Coffee Association (NZSCA), says the coffee industry took off in his country after a late start. As coffee roasters flourished, each tried to improve on the quality, setting a high standard early on. New Zealand now has more roasters per capita than anywhere in the world and some of them have made the move to the UK, including companies Allpress and Ozone.

Back in Sheffield, Natalie agrees with Burton about the need for high-quality milk to make lattes and flat whites, and believes New Zealand-style hospitality will continue to grow.

“The New Zealand and Australia café scene as a whole is a real source of inspiration to still be tapped into. We were lucky to experience it first hand for so long and continue to do so when we return to visit our family and friends there. Their approach to everything in hospitality is exceptional and the UK still has a long way to go.”

“Their coffee seems to be something of a regional landmark,” GQ said.